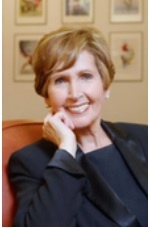 From 1987 until 2003, Ambassador Morella represented Maryland’s 8th Congressional District in the U.S. House of Representatives where she developed a national reputation as a leading advocate for women, children, and families. Previously, she served in the Maryland House of Delegates and is the only woman member of the Maryland General Assembly to be elected to the U.S. Congress.

A strong supporter of economic growth through free trade, Ambassador Morella was in the forefront in the Congress on matters of trade and foreign policy. She advocated liberalized trade rules and heightened international engagement. She chaired the Congressional Caucus for Women’s Issues, advancing efforts to promote access to micro-enterprise capital among women in developing countries. She was Co-Chair of the Congressional Delegation to the U.N. Women’s Conference in Beijing.
On her watch as Ambassador to OECD, she was a key participant in the negotiations and agreements leading to a strategy of enlargement to include five potential country members: Chile, Estonia, Israel, Russia, and Slovenia. She also advanced the program to engage with the rapidly developing countries of Brazil, India, Indonesia, China, and South Africa as well as the Southeast Asia region. Ambassador Morella actively participated in the successful revisions and updates of the Principles of Corporate Governance and worked to strengthen the OECD Anti-Bribery Convention.

For her many efforts, Ambassador Morella has received numerous awards and recognitions including induction into the Maryland Women’s Hall of Fame, outstanding public service awards from the American Medical Association, the American Bar Association, and the Hubert H. Humphrey Civil Rights Award from the Leadership Conference on Civil Rights “for selfless and devoted service in the cause of equality.” The Republic of Italy awarded her the Medal of the Legion of Merit.

She was elected President of the U.S. Association of Former Members of Congress. She serves on the Advisory Boards of the Comptroller General, U.S. Government Accountability Office; the George C. Marshall Foundation; and the Cafritz Foundation. She is Chair of the Franklin Center for Global Policy Exchange and serves on the Board of Directors of the Institute for Representative Government, and the Washington Institute of Foreign Policy.

Prior to her service in the U. S. Congress and the Maryland House of Delegates, Ambassador Morella was a Professor of English at Montgomery College, Rockville, Maryland from 1970 until 1985. In 2008 she was a Resident Fellow at Harvard University’s Kennedy School Institute of Politics. She was appointed Ambassador in Residence at American University School of Government in 2009 where she teaches “Women, Politics, and Public Policy.”

Ambassador Morella holds a B.A. from Boston University, an M.A. from American University and 12 honorary degrees.